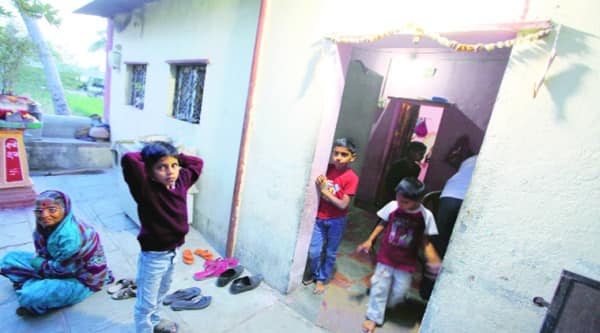 A house in Shani Shingnapur with no doors

The shrine for Shani Devstahn, a black rock over five feet tall, installed on a platform without a roof, sits at the heart of the village of Shani Shingnapur in the Ahmednagar district of Maharashtra. It’s this temple that strengthens the local tradition of not installing doors and locks to the village houses. Once a humble affair, the temple has now grown into a large trust with extensive property and donations that run into lakhs. But it still does not have a door, much like the homes of the 4,000-odd residents of the village, where empty door frames mark the entrance to houses. “We believe that if a person steals anything, or does anything dishonest, he faces a Sade Saati (a period of seven-and-a-half years of bad luck). Somethings bad happens in the family — court cases, accidents, deaths, losses in business. My cousin had once installed wooden panes at the entrance of his house. His car met with an accident the very next day. Shani’s power is indisputable and he watches over this village. Otherwise, why would people come here from all over the world?,” asks Anil Darandale, a cashier in the “foreign currency” section of the temple donation department.

Darandale is one of the many villagers who want to keep talking about the tradition of the village, but there are many others who feel that it is time to part ways with what they feel is a superstition. Till 2010, Shingnapur had no major record of thefts or pilfering, but things have changed since then. In 2011, gold ornaments worth Rs 70,000 kept in an unlocked cupboard, were stolen from the house of a temple trustee and other petty thefts were reported. Anil Behrani, in-charge of the Sonai police station which has jurisdiction over the village, says, “Though there hasn’t been a significant rise in the number in the last couple of years, there have been incidents of vehicle thefts, pickpocketing and snatching from areas around the temple.” Adding doors to their houses has become contentious over the last few years and most villagers do not want to talk about it. Ajay*, a 30-year-old farmer is planning to build a house for his family on his farmland, and is emphatic that he wants doors to his house as well as a lock similar to the one in the local bank. “I go to the temple regularly. But I also want to take precautions to ensure my family is safe. I know I am going face a lot of resistance from the villagers, but I don’t want to take chances,” he says. Some people who live on the village boundary have started adding doors because their houses are in a secluded area and there is a fear of dacoits. Another farmer, whose home lies towards the end of the village, has installed a detachable wooden door at the entrance of his house. “I have also installed doors to the toilet block in the backyard. It makes no sense to not have doors there,” he says.

In 2011, UCO Bank opened a branch in Shingnapur, and they now have around 3,700 account holders. A bank employee says, “No bank can run without proper security arrangements and locker facility. We have a door but it does not have a conventional lock. It has a remote controlled electromagnetic lock. We cannot blatantly break the traditions here, but we cannot compromise on security either.” A senior police officer from Ahmednagar of deputy superintendent rank says a compromise is the best way to maintain peace in the village. “The economy of the village revolves around the temple, so the no-theft claim is important for its continuing popularity. Many thefts go unreported because of the pressure from villagers. We try not to interfere as long as these beliefs do not lead to any security issue,” he says.