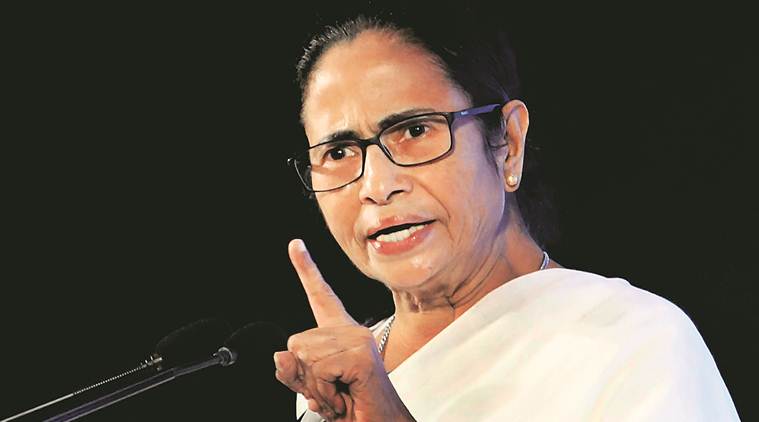 Mamata Banerjee has been actively campaigning against the contentious citizenship act. (Express photo by Partha Paul)

Launching a fresh salvo at the BJP, West Bengal Chief Minister Mamata Banerjee Tuesday claimed that the Citizenship (Amendment) Act (CAA) is a ploy by the saffron party to take citizenship away from Indian citizens and hand it over to foreigners who have funded them.

“Is this Act a ploy to take away the citizenship of those legal citizens and giving it to those foreigners who have funded the BJP?” she said speaking from the dharna manch of the Trinamool Congress Chatra Parishad, her party’s student wing against the CAA, in Kolkata.

She also claimed that those helping BJP get foreign funds and turn black money into white, in return of which they are getting Indian citizenship.

Banerjee, who has been actively campaigning against the contentious citizenship act, had skipped the opposition meeting called by the Congress on Monday. A total of 20 parties took a resolution demanding immediate roll-back of CAA and stopping the National Population Register (NPR) exercise.

In an apparent reference to the killing of Bengali labourers at Kulgam in Jammu and Kashmir by terrorists in October 2019 following the revocation of Article 370, Banerjee said the people of other states face no threats and are safe in Bengal. “We know how to respect our guests, we even show courtsey to our enemies, but that doesn’t mean our party leaders won’t be allowed to enter Jammu, Guhawati and JNU,” she said.

She also hit out at the BJP saying, “Do they (BJP) have any understanding with Pakistan or are they brand ambassadors of Pakistan.”

This is the second time Banerjee has accused the BJP of being ambassadors of Pakistan. On January 3, she had called Prime Minister Narendra Modi an “ambassador of Pakistan” since he “glorified” the neighbouring country by comparing it with India.

Last week, Mamata held a ‘courtesy meeting’ with Prime Minister Narendra Modi when the latter visited Kolkata and had registered her protest against CAA and NRC.

“I told him that maybe this is not the appropriate time for me to say this, but we feel strongly about this issue. We are against CAA, NRC and NPR. But we have been agitating against CAA, NRC, and NPR. I told him we are against dividing people. We do not want people to be driven out of the country. We do not want people to face any atrocities. I told him that the Centre should rethink on CAA. We want it to be withdrawn,” the chief minister had said.

A strident critic of BJP, Mamata has been opposing the CAA-NRC-NPR consistently from the beginning and has led nearly a dozen protest rallies, padayatras, and public meetings against the Centre on this issue. She has announced that the CAA and NPR would not be implemented in West Bengal. Police on alert as villagers ‘spot’ armed men in Raigad

A day after jibe at Amazon, Piyush Goyal says ‘all investments welcome’

Iran to send black boxes of downed plane to Ukraine